Neuroradiology brain tumor board review. This lecture is geared towards the ABR core exam for residents, but it would be useful for review for the ABR certifying exam or certificate of added qualification (CAQ) exam for neuroradiology.

More description and the answer (spoiler!) are seen below the video.

The CT of the head shows a lesion in the right temporal lobe with masslike expansion and calcification.

0:55 The differential diagnosis for calcified lesions in the brain is pretty selective. A few tumors, including oligodendroglioma, meningioma, and pleomorphic xanthoastrocytoma (PXA) are well known for calcification. Only a few metastases calcify, and those are mostly bone tumors like osteosarcoma and chondrosarcoma. Vascular lesions including arteriovenous malformations (AVM) and cavernous malformations can also calcify, but the calcifications may look vascular. 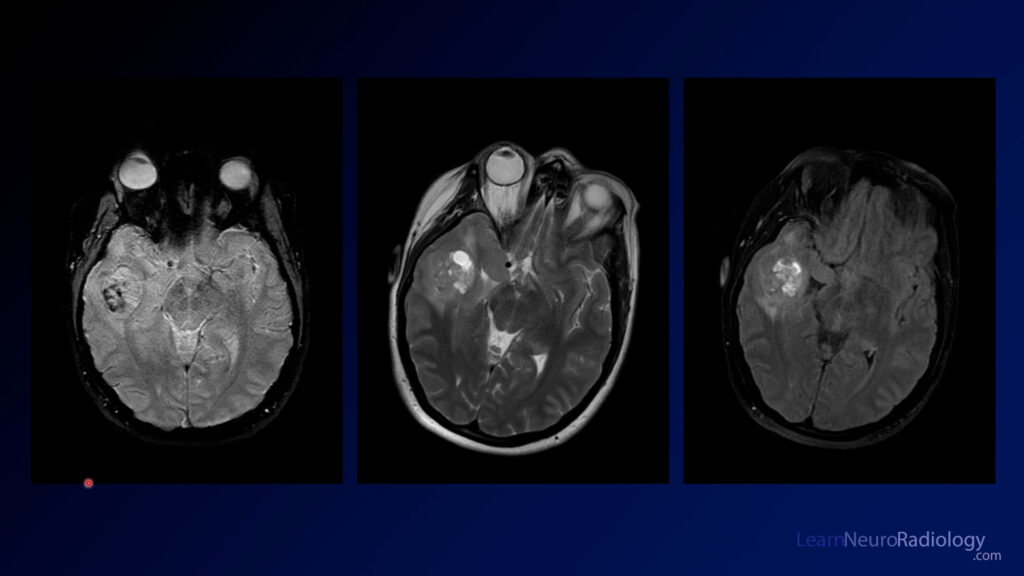 The MRI shows a heterogeneous mass in the right temporal lobe. There are T2 hyperintense areas of non-enhancement that appear almost cystic. There is some surrounding edema, although the extent of mass effect is less than expected given the size of the mass. GRE or susceptibility imaging show areas of hypointensity likely corresponding to the calcification on CT. On post-contrast imaging, there is heterogeneous, irregular enhancement with a broad dural margin.

2:12 The diagnosis is: pleomorphic xanthoastrocytoma (PXA)

PXAs are relatively rare tumors occurring in teenagers and younger adults. They are WHO grade 2 tumors. They are most commonly supratentorial. A classic trademark is a dural tail, which is relatively uncommon for intraparenchymal tumors. In many cases they can look like a much more aggressive tumor, but it is a nice clue if it has less mass effect than expected. Think about PXA if you see a tumor that looks more aggressive than it should for size and mass effect.

Framework for evaluating cortical temporal tumors. There are a few common tumors you may encounter in the temporal lobes in seizure patients. First consider whether they are ill-defined or well-marginated. If ill-defined, the differential includes astrocytoma or oligodendroglioma. If well-marginated, then consider whether there is enhancement. If no enhancement, DNET is most likely. If there is a small amount of nodular enhancement, favor ganglioglioma. As in this case, PXAs tend to have more enhancement in a more irregular pattern. 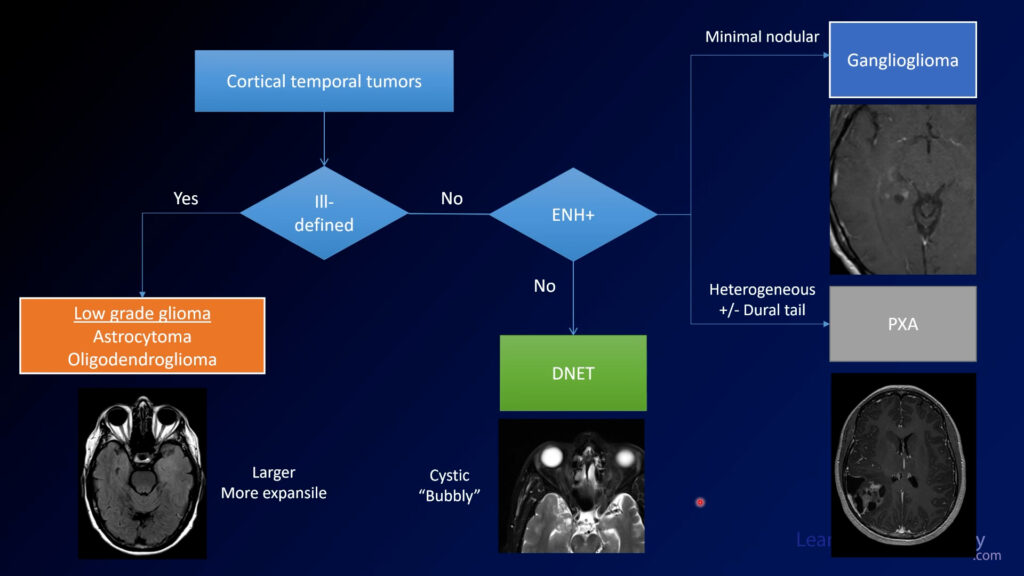 In summary, it is helpful to have an approach to cortical tumors that can help you differentiate these lesions. Remember, it can be challenging to differentiate them without a biopsy in real life, but it is nice to be able to hone your differential diagnosis.